Earlier this week we got a storm blowing through here, the first real blizzard we’ve had in two winters. I admittedly like a good snow storm, but I had missed having the occasional serious dump of snow.

Maybe it’s because it makes me feel like a kid again. A blizzard is the only time when work closes down, like when you are in school. As a grown up you know not to expect time off from work in the form of snow days, regular holidays, or regular vacations. This is why a serious storm can be fun. A guilt free, or sick free day of no work.

But also, you can be a kid again and go play in the snow. There usually isn’t enough snowfall to softly catch an adult body as you do a trust fall right into it. Two feet not only makes it possible, but repeatable. There’s something about being able to throw yourself back on a gigantic pillow of softness that goes whump when you land.

Remember those days when you went out on the street and played with all the other kids in the neighborhood? It’s the same feeling as you and your responsible neighbors come out into the parking lot and help each other make a single path out to the street and wipe each other’s cars down. I never see my neighbors. Everyone usually minds their own business and occasionally nods or waves. During the aftermath of a storm of these proportions, we all came out en masse wading through 2 feet of snow and laughed at the ridiculous amounts we got, competed with each other to see who could dig faster, and with humor and teamwork, made quick work of excavating all the vehicles. It was like we were all kids again and followed that magical code of childhood that declares that every kid on the street is part of your gang of friends. 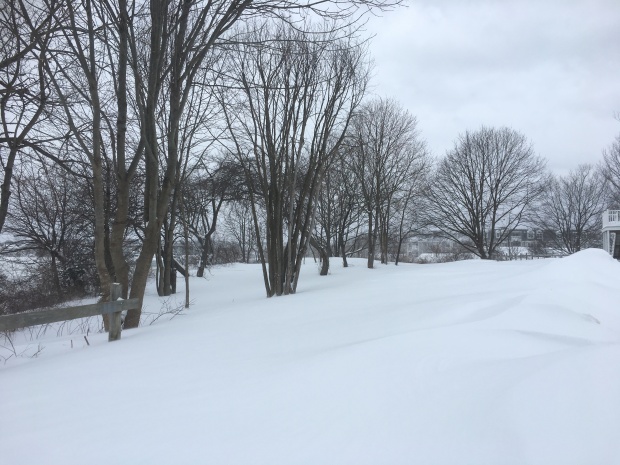 It’s lovely and gives me faith in human kindness in a time where our country feels like it’s on the verge of instability.

I am a person of several interests and hobbies. I can be inconsistent in my pursuits. Sometimes I'm nerdy and geeky, sometimes my head is in the clouds, other times I lean towards old-lady-at-home who still wears college-girl fashions. Most recently I've acquired the need to discuss politics, something I would never have previously done. Current events in this country can be very motivational.